After the victory of the 1911 Revolution, the Qing emperor abdicated and the Republic of China was founded. When the Republic of China was founded, because the currency system had not yet been established, most of the major mints still used the steel mold of the former Qing Dynasty to cast coins for circulation. At that time, Sichuan changed its coin into Sichuan copper yuan with the value of 200 Wen and 500 Wen 1. Later, in the "provisional presidential decree" issued, it was proposed that "a new model should be published to drum up commemorative coins". After the national government unified the coin pattern, the original coins were stopped to be issued. Therefore, the Sichuan Mint had a small amount of 200 Wen coins, which had a short circulation time and was extremely precious. 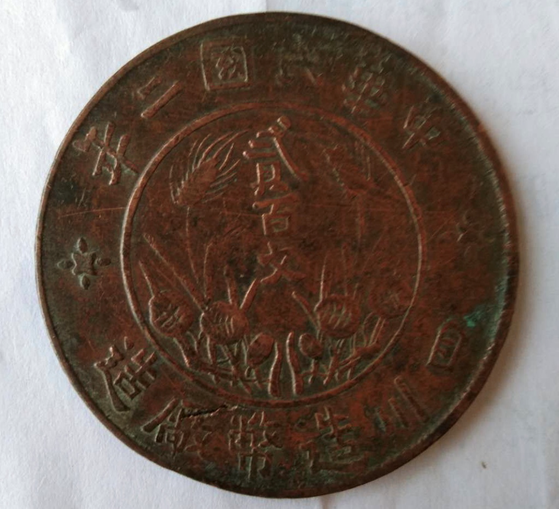 Two hundred Wen Double Flag coins were made by Sichuan general mint. On the front of the coin, the word "two hundred characters" was cast inside the circle, and the bottom of the circle was surrounded by ears of wheat. On the outside of the circle, the six characters of "made by Sichuan MINT" were cast on the bottom, with a four corner star pattern on the left and right sides. On the back of the coin, there were two flags crossed in the middle, and the flag pole was tied with curved Yingluo Li is located in the Pearl circle, with the English font "year of the Republic of China" at the top and "200 characters" at the bottom. According to the flag pattern on the back of this coin, there are differences between straight tassel and Qu Ying coin. This coin with 200 characters made by Sichuan Mint belongs to Quying Double Flag. 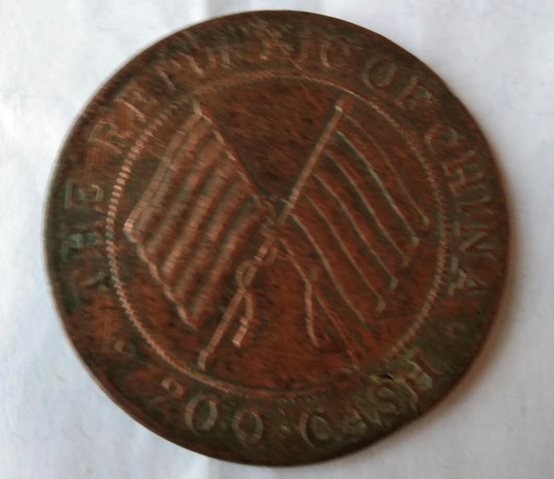 Because Shuangqi 200 Wen copper coin is not produced by a single foundry, its format is also relatively more. Only there are more than dozens of different formats. The two hundred Wen copper coins can be divided into two types according to the different patterns of the two flags hanging down on the back of the coin. The vertical hanging of the flag tassel is called the "straight tassel plate"; the one with the flag tassel hanging around the flagpole is commonly known as the "curved tassel plate".

In October 1911, the revolution of 1911 broke out. In December, Sichuan established the Sichuan military government of the Han Dynasty. The Sichuan military government took over the Sichuan Branch Mint in Chengdu. In order to meet the needs of military supplies and road protection movement, the former Qing Dynasty's Longmo silver and copper coins were abolished, and the Sichuan silver and copper coin models were created. Since 1912, the Sichuan Mint officially opened the "Han" copper coin of the Sichuan military government. This copper coin is a high-quality coin cast in 1913. It is naturally coated with slurry and Baozhen. It is a high-quality copper coin with high collection value. It is also a very important category. It can even be said that it is the main variety of copper yuan in the Republic of China. There is no limit to the appreciation of its future value. Although the collection has gone through endless years, the lines are still clear and visible. The rust on the collection has witnessed the accumulation of its history. It has a very obvious historical transitional characteristics and has an ineffable collection value. The copper coins are well preserved, and their inscriptions and outlines are clear. They have high historical value, artistic value and collection value.